The Importance of Testimonies

I used to th 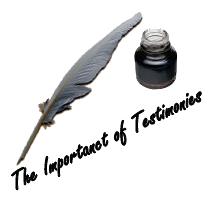 ink that testimonies were a way for a person to exalt him or herself. I would hear people say such things as, “I went up to this person with an injury. I prayed for them, and they got totally healed in the name of Jesus!”

The problem wasn’t in their testimony, the issue lied in the way I interpreted their testimony. I felt as if people were bragging about themselves, since they were used by God to bring freedom to another person. The reality is though, God was indeed receiving the credit for the miracles He worked through that person.

We need to release the testimonies of what God is doing in our lives. Why? Let me give you three reasons.

1). Testimonies Point to, and Glorify God

Our testimonies should always point to, and glorify God. In the book of Acts 4, we see Peter and John taken before the Sanhedrin (religious leaders) because God healed a lame name through them at the temple gate, Beautiful. In verses 8-12, the Bible says, 8 Then Peter, filled with the Holy Spirit, said to them, “Rulers of the people and elders of Israel: 9 If we this day are judged for a good deed done to a helpless man, by what means he has been made well, 10 let it be known to you all, and to all the people of Israel, that by the name of Jesus Christ of Nazareth, whom you crucified, whom God raised from the dead, by Him this man stands here before you whole. 11 This is the ‘stone which was rejected by you builders, which has become the chief cornerstone.’ 12 Nor is there salvation in any other, for there is no other name under heaven given among men by which we must be saved.” Their testimony pointed to, and glorified the Father, Son, and Holy Spirit.

Our testimonies combat the devil. In the book of Revelation 12:11, the Bible says, And they overcame him by the blood of the Lamb and by the word of their testimony... Our testimonies release faith and encouragement into other people.

3.) Testimonies Encourage God To Do It Again

Our testimonies actually encourage God to do the same thing again. The Bible tells us in the book of Revelation 19:10, ...For the testimony of Jesus is the spirit of prophecy. I have been in meetings on several different occasions when a person testified of somebody getting healed of a certain ailment. As soon as the testimony was released, the same miracles began to manifest again on different people. God basically strings out miracles in the release of testimonies.

Be encouraged to release the testimonies of the wonderful miracles God is working through you.
Posted by All Sufficient God Church at 5:27 PM