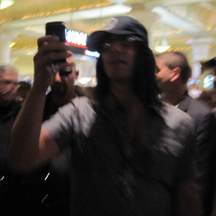 riss is apparently the #1 magician in the world, and has become world reknowned through his TV show called, Criss Angel: Mindfreak. You can check out his website at: www.crissangel.com.

Our whole purpose on meeting Criss, is to release the Heavenly Glory over him. If you know anything about him, he is not rolling in the light. He has a huge destiny, that God would like to see fulfilled.

We honor Criss because he is created in the image of God (see Genesis 1:27). I do not agree with his practice of magic at all. The Bible makes it pretty clear to stay clear of this sort of practice. (See Leviticus 19:31, II Chronicles 33:6, Ezekiel 13:18.)

Actually, I am pretty outraged at what Criss does. He mesmerizes the people. People think he is some sort of messiah. I am also upset that the Body of Christ has not risen up to counter such deception. Let’s look at a similar situation found in scripture, but somebody who was able to combat the sorcery with the Holy Spirit. This is an example of what should be happening in all believer's lives. 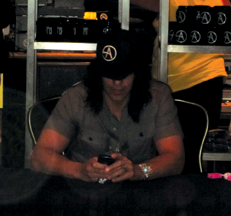 4 Therefore those who were scattered went everywhere preaching the word. 5 Then Philip went down to the city of Samaria and preached Christ to them. 6 And the multitudes with one accord heeded the things spoken by Philip, hearing and seeing the miracles which he did. 7 For unclean spirits, crying with a loud voice, came out of many who were possessed; and many who were paralyzed and lame were healed. 8 And there was great joy in that city. 9 But there was a certain man called Simon, who previously practiced sorcery in the city and astonished the people of Samaria, claiming that he was s 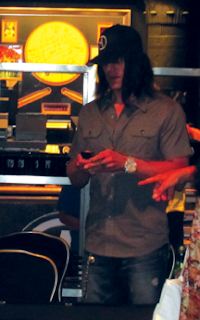 It is interesting that I actually met Criss Angel today. The Lord has put Criss on my heart for at least six months now. Back when I was a student at Bethel School of Supernatural Discipleship, I would have visions of meeting Criss. I would envision releasing the Kingdom on him, and eventually getting saved 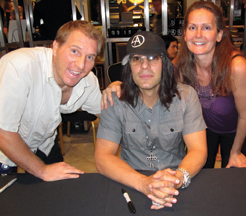 from our encounter. This has been the single most important task the Lord has ever given me up to this point. When Criss receives Jesus as Lord and Savior, the world is going to change. He will impact it that much.

This was the encounter Dawn and I had with Criss Angel. We waited for five hours, to spend two minutes with him, to ultimately spend eternity in Heaven together. Dawn and I went up together so he could get blasted with a double dose of the Holy Ghost. We also got a free poster for him to sign so we could have more time releasing the Kingdom on him. We made sure to slap our Holy Spirit anointed hands on him multiple times.

God’s Glory on us was actually pretty thick. We brought in our iPod, and little iPod speaker. We had Jake Hamilton and Kim Walker playing the entire time. Even when we got our photo taken with Criss, you could hear Jake Hamilton singing from the speaker that I placed on my belt loop.

As soon as I touched his shoulder with my two hands, in a partially kind of hug, I felt something release from me. I felt like I had laid hands on him in an impartation. He certainly received something.

I then began to say what I felt like I was supposed to say to him. “Do you know what the most amazing thing about you is?”

“You haven’t started to step into your destiny yet.”

“Ya, I’m still working on it,” he commented.

Dawn replied back to him, “Bless you.”

After we left, Dawn told me while we were getting our photo with him that she was declaring Kingdom revelations for him, “You are royalty. You have destiny. You have been set free. You are going to shape history.” These are lyrics from Jake Hamilton, but they are true and very powerful.

The entire encounter was sort of awkward and strange. I knew there wasn’t going to be a huge scene of Dawn and I casting demons out, or some sort of showdown like that of Elijah and the priests of Ba’al in I Kings 18, but I was hoping for a little more.

Dawn and I absolutely 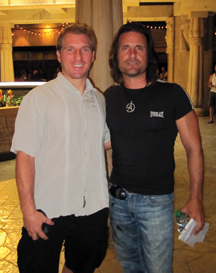 know something happened today in Criss’ life, and his brother, J.D. We met J.D. too, and slapped our Glory hands on him. On the drive home I was a little frustrated, because there were a number of people in line in wheelchairs. The Bible says that Philip healed the lame, which was a major reason Simon the sorcerer got converted. The Lord never gave us permission to pray for these people.

There was one guy in a wheelchair missing both his legs and arms. Jesus healed the maimed (see Matthew 15:30-31 NKJV), we should be able to. If that would have happened today, the glory would have shifted from Criss Angel, to the Lord of Hosts of angels, Jesus Christ. The Lord gently reminded me, “You need not worry about it, I am going to get the final laugh.”

Later tonight, Dawn and I went to the International Church of Las Vegas. Lou Engle is here for a pre-Call to the Call in Sacramento on September 3-4. God is so good. Lou said from the pulpit, “The devil has been having his laugh now, but God is raising up and getting ready to release the consecrated ones, the ones who are set apart, the Nazarites.” This was confirmation to let me know that God is not asleep in Heaven. He knows what is transpiring down here on earth. We need to keep going after revival in all we do.

I hear the Lord speaking to all of us from the scriptures, whom will you serve? In Joshua 24:14-15, the Bible says—

Lord, transform us. It is time for people to get serious about what they really believe in. Stir the hearts of the people, and shake the sleeping nations. Bless you, Lord. In the name of Jesus, Amen.
Posted by All Sufficient God Church at 8:12 PM