The Harvest is Plentiful

Tonight is our first night of ministering to the people. However, it was not the open 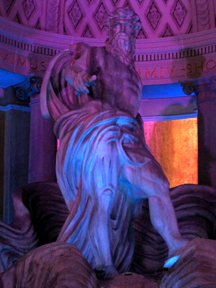 Heaven we were hoping for. It was a pretty rough night. We did prophesy destiny over a few people though. It was really a tough crowd. After a number of hours, we ended up walking into the forum shops at Caesar’s Palace to try and get some relief. We stayed there and prayed for over an hour.

What is really encouraging though, is that this city is ripe for God. You can see a desperation upon the faces of so many people. I believe people here are ready to encounter a powerful God, they just don't know it yet.

The scriptures from Matthew 9:36 kept coming to mind­—36 But when He saw the multitudes, He was moved with compassion for them, because they were harassed and scattered, like sheep having no shepherd. 37 Then He said to His disciples, “The harvest truly is plentiful, but the laborers are few. 38 Therefore pray the Lord of the harvest to send out laborers into His harvest.”

Lord, we pray that you would send out laborers into Your harvest, in the name of Jesus, Amen.
Posted by All Sufficient God Church at 5:16 PM