Before Dawn and I went out onto the Las Vegas Strip tonight, we asked the Lord, “Lord, where would you have us go tonight?” I heard, “Rio, walk it, Paris, walk it.” The Rio Hotel and Casino has been on our heart for the past several days because of a night club there called, Voodoo. We wanted to go pra 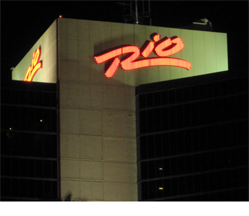 y over it. It is about a half mile off the Strip though. In regards to Paris, we haven’t been inside this section at all. We’ve only walked by it once or twice.

We started our night at the Bellagio and walked to Rio. We walked all around Rio and prayed over the area. We then crossed the street and went to the Palms. We always make an attempt to go to the entrances of night clubs, strip joints, tattoo shops, magic stores, and fortune tellers. From there, we release the Glory 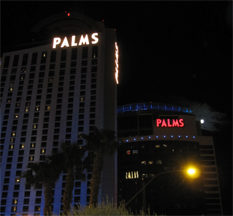 of God all over the place.

We eventually made our way back to Las Vegas Boulevard. We went into Paris, Planet Hollywood, and the Miracle Mile shops. Certainly tonight was a lot more interceding for the region than the people. I was actually starting to get a little frustrated, because I didn’t feel I had a release to start pray for people individually. I certainly have a strong evangelical anointing on my life, so I want to see people get saved.

The Lord is still teaching me though, through Dawn. Dawn is more of an intercessor. She likes to pray over the land, and the strongholds in a region. I would rather minister to the people. However, the Lord is having us pray a lot more for Las Vegas itself, rather than individual people.

Dawn believes praying for the region is like the Air Force. The aerial combat fighters go into a region and “soften it up” with their air strikes. The foot soldiers then should go in and clean-up. For me personally, I just want to run in and start pulling hostages out of the clutches of the devil. That doesn’t mean I don’t have a strategy though. I am like a guerilla warrior behind enemy lines, going into the dark areas, and pulling people into the light.

I understand what Jesus said to the seventy that He sent out to spread the Good News. Jesus said in Luke 10:3—

Go your way; behold, I send you out as lambs among wolves.

When Jesus said this however, the promise of the Holy Spirit wasn’t given yet. The Spirit came to dwell within His people after Jesus’ resurrection from death. We see the fulfillment of the promise of the Holy Spirit in Acts chapter 1. Even if I am still a lamb amongst wolves, I at least have to qualify as a “Lambo.” I plan on taking out some wolves in order to see people set free.

During our walk tonight, I started to wonder, “Lord, honestly we are only two people. What good does it really do for us to pray over this region, and walk all around it?” The Lord began to speak to me through scripture. He reminded me of two specific areas of scripture. The first was Numbers 14:11-21. The Bible says—

11 Then the LORD said to Moses: “How long will these people reject Me? And how long will they not believe Me, with all the signs which I have performed among them? 12 I will strike them with the pestilence and disinherit them, and I will make of you a nation greater and mightier than they.” 13 And Moses said to the LORD: “Then the Egyptians will hear it, for by Your might You brought these people up from among them, 14 and they will tell it to the inhabitants of this land. They have heard that You, LORD, are among these people; that You, LORD, are seen face to face and Your cloud stands above them, and You go before them in a pillar of cloud by day and in a pillar of fire by night. 15 Now if You kill these people as one man, then the nations which have heard of Your fame will speak, saying, 16 ‘Because the LORD was not able to bring this people to the land which He swore to give them, therefore He killed them in the wilderness.’ 17 And now, I pray, let the power of my Lord be great, just as You have spoken, saying, 18 ‘The LORD is longsuffering and abundant in mercy, forgiving iniquity and transgression; but He by no means clears the guilty, visiting the iniquity of the fathers on the children to the third and fourth generation.’ 19 Pardon the iniquity of this people, I pray, according to the greatness of Your mercy, just as You have forgiven this people, from Egypt even until now.” 20 Then the LORD said: “I have pardoned, according to your word; 21 but truly, as I live, all the earth shall be filled with the glory of the LORD—

Moses—one person—actually interceded for the entire nation of Israel. God was ready to destroy all of them, but Moses “changed the mind” of God. God spared the nation because of one person’s prayers. If God did that for Moses, He will surely do that for you and I. The Bible makes it clear there is no partiality with God. (See Acts 10:34, Romans 2:11, and Ephesians 6:9.)

Not only that, II Corinthians 3:12-19, gives you and I permission to excel way further than Moses did. The Bible says—

7 But if the ministry of death, written and engraved on stones, was glorious, so that the children of Israel could not look steadily at the face of Moses because of the glory of his countenance, which glory was passing away, 8 how will the ministry of the Spirit not be more glorious? 9 For if the ministry of condemnation had glory, the ministry of righteousness exceeds much more in glory. 10 For even what was made glorious had no glory in this respect, because of the glory that excels. 11 For if what is passing away was glorious, what remains is much more glorious. 12 Therefore, since we have such hope, we use great boldness of speech— 13 unlike Moses, who put a veil over his face so that the children of Israel could not look steadily at the end of what was passing away. 14 But their minds were blinded. For until this day the same veil remains unlifted in the reading of the Old Testament, because the veil is taken away in Christ. 15 But even to this day, when Moses is read, a veil lies on their heart. 16 Nevertheless when one turns to the Lord, the veil is taken away. 17 Now the Lord is the Spirit; and where the Spirit of the Lord is, there is liberty. 18 But we all, with unveiled face, beholding as in a mirror the glory of the Lord, are being transformed into the same image from glory to glory, just as by the Spirit of the Lord.

The second scripture the Lord brought to my mind was James 5:16b. The Bible says—

16 ...The effective, fervent prayer of a righteous man avails much.

He shall say, ‘ Surely in the LORD I have righteousness and strength'... 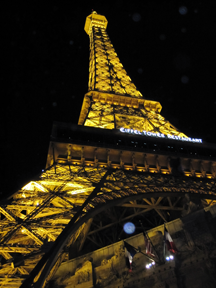 Therefore, I can rest assured that the effective, fervent prayer of a righteous man avails much, because I am righteous in Him.

God was also so good to show us we were making a difference by physically manifesting in our photos. If you look closely into the photos of the Eiffel tower replica, you will see a number of orbs. These white circl 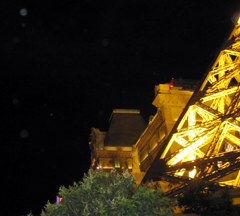 es of light are considered by many to be angels. Dawn and I have a number of photos with similar orbs in them during praise and worship services. It is pretty evident to see the power of prayer. When we pray, God responds.

Lord, thank you for the heart You have towards mankind. Thank you for your great grace and mercy. Please remove the blinders of the people in Las Vegas. We pray all of this in the name of Jesus Christ. Amen.
Posted by All Sufficient God Church at 4:47 AM