April was a wonderful month for Dawn and I on the USA mission field. We sadly left sunny southern California, for surprisingly sunny southern Oregon. We love every place we go though.

Dawn and I live a "book of Acts" lifestyle. We go where we feel the Lord is calling us to go and minister. Our time in Oregon has been extremely fruitful thus far. God has touched numerous people in miraculous ways.


The spiritual gifts of prophecy and words of knowledge have thus far been the most effective way for Dawn and I to minister to people on the streets. (I Corinthians 12:7-11.) Before we were activated in the prophetic, we would try to reason and debate with people on why they needed a personal relationship with Jesus Christ. Needless to say, the fruit of our labors were pretty minimal.


For example, we previously found a person on the streets who believed humans descended from aliens. When we talked about God with them, all they wanted to do was argue. However, the Lord gave us a specific prophetic word for the person. Once we shared the word, they wanted to know more about the God of the Bible we were preaching. They knew the word was explicitly for them, from God.


I believe God is pouring out His Holy Spirit in great measures in these days. God is increasing His prophetic anointing upon His children who desire to receive it. (Luke 11:5-13.) I also believe the time of religious debating is coming to a close, and the true power of the Holy Spirit is going to be displayed. The apostle Paul penned in I Corinthians 2:4-5— 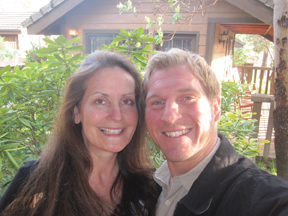 It is Dawn and my strong desire to see the church activated in prophecy, and the other spiritual gifts to combat the dark forces of the enemy. It was with great honor we were asked to be special guests at a church in southern Oregon.


After much prayer, I was convinced the Lord gave me clear directions on what He wanted me to do that Sunday morning. It required a huge risk on my part, and a leap of faith. However, God has already stretched us in so many ways—like singing in tongues on an open microphone in the midst of a satanic dance worship, and holy "King David" dancing in the midst of a Voodoo ceremonial drum circle—I knew the Lord would see us through this challenge too.


The challenge was to activate an entire church congregation in the prophetic in 45-minutes. God was faithful. We did a prophetic activation, and the Holy Spirit showed up powerfully. The vast majority of people were clearly hearing the voice of God, and prophesying words of edification, exhortation, and comfort. (I Corinthians 14:3.) It was amazing. Many people were also having heavenly visions of what the Father was doing.

The Bible tells us, Jesus only did what He saw the Father do, and He only spoke what He heard the Father speak. (John 5:19, 12:49-50.) It is time for the entire church to follow Jesus’ example and see and hear what the Father is doing, and then mimic Him.

Yours in Christ Jesus, our Lord.
Nathan and Dawn Pietsch
http://www.allsufficientgod.org/give.php


Posted by All Sufficient God Church at 5:41 PM